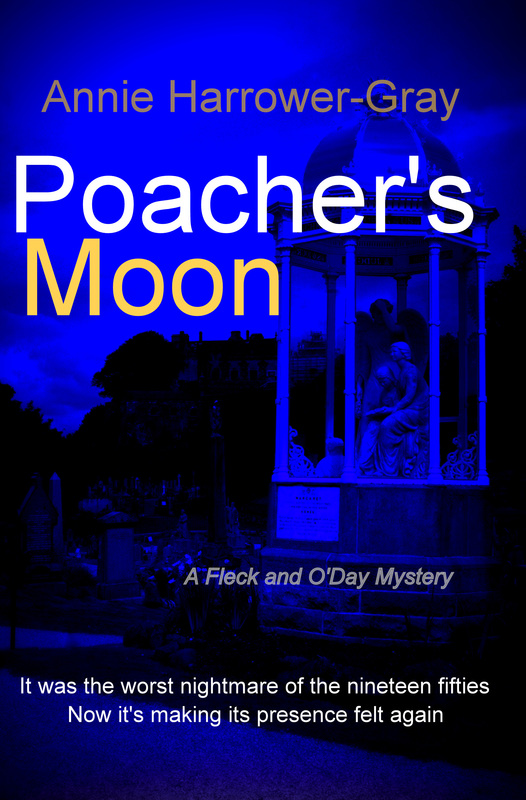 In medieval Scotland an explosion kills a leading Alchemist and on his death, his stallion stamps his foot three times causing church bells to ring all over Europe. This is the cue for a red haired woman to mount the stallion and deliver his grimoire to the sun-worshippers who will put it to good use. On it's journey, the spell-book falls into the wrong hands and surfaces to cause tragedy in the 20th Century.
Stirling during the 1967 summer of love. The town is coming to grips with the new university, hippies and hash. Bridie Malone, brought up on the Raploch  housing scheme, defies her family's criminal tradition and joins the Police Force. Only a week out of training, she discovers the body of an old woman in a cottage behind The Rapploch. Helen Swankie, a herbalist. appears to have died of Hemlock poisoning,
Keen to become the first woman in Stirling's CID, she and her friend, genealogist Charlie Fox find themselves unravelling  the mystery behind Helen's murder.  All developments have to be discussed in hushed tones though, for Charlie has inherited an African Grey parrot from her grandfather, once  a  Clyde steamer Captain. As well as broadcasting confidences to Helen Swankie's white rabbit,and anyone who will listen, the Bosun is fond of reciting a bawdy sea shanty.

Well it's published and out in both print and e-book at Amazon.


He saw them watching him, these robed figures lurking behind their long shadows as they hid in the tower’s dry moat. The same robed figures pursued him as he roamed the market places of Kirkcaldy, interrogating the superstitious folk that haunted the luckenbooths. They stalked him across the moors when he hunted rabbits and deer, certain he would lead them to the hiding place, the spot where what the knowledge they craved was buried.
In the weeks gone by they had first tried to flatter him into parting with it then bribed and threatened him. One by one the tight web of alchemists, spun from Paris to Milan was tracked down and tortured. When they found it they would kill him. He knew how he would die and by whose hand, but not the actual day he would meet his maker.
He devised a cerebrerium, an intricately fashioned helmet to fend off the inevitability of his death, if only for a short while. It protected his head now as he edged his way towards the cave gorged out of the Bel Crag, aware that they were following him, their eyes boring into his back. These men of the cloth, they would be disappointed, he only intended filling up his jug of ‘Aqua Ardens’ to sample its quality. The King was impatient for delivery of the new alchemic drink, calling it Usquabae, ‘The Water of Life’. Soon, the whole of Alexander III’s court would be intoxicated by this fashionable new potion. It was not the water of life these robed figures sought, it was the power and wealth that his formula for preserving life could bring. The Prelates, their masters would never own it while he lived. It would be his legacy to the people.
The blast reverberated through the fields and villages as far away as Pittenweem. Every bird and animal scurried into the cover of the undergrowth to escape the toxic emissions from the explosion.
Reaching her stone and mud cottage a mile away, the tall red-haired woman could smell disaster on the rising wind before she saw the crag erupt into a thousand heaven bound pieces. Placing her basket of fresh herbs by the door, she let her fingers roam over the package sown into the lining of her plaid, seeking the reassurance its presence brought. Finding the thin book still wrapped in the rough wool, she breathed deeply, inhaling the fumes from the dispersing alchemic concoctions, filling her nostrils with the fragrance of second sight. For a brief moment the scene of destruction played out in front of her. She saw the cerebrerium spinning through the air and disintegrated before the small sharp piece of rock struck his head, extinguishing life.
Once more she sought the comforting presence of the grimoire. When she turned, she found the coal black steed waiting behind her, his saddle bags bulging with gold and provisions. The alchemist’s soul had departed his mortal body and it would not be long before his persecutors realised that she possessed the book of secrets.
As soon as she mounted, the stallion stamped his foot three times on the rock, leaving his print on its solid surface. The sound of his pounding hoof went unheard in the Kingdom of Fife. In Paris the bells of Notre Dame rang out three times and the death knell sounded across Europe.
Horse and rider passed across the stream no fiend, human or supernatural could cross. Once over the burn she relieved the horse of some of his burden, leading him through Dunniker Den. Crows lined up along bowed branches, harvested of their fruit now and laden with grief. The blackbirds ceased their chattering as she passed and cast down their heads in acknowledgement of her sorrow.
Once more the woman raised her head to the breeze picking up the scent of the sun worshippers who once toiled the den’s fertile earth. With mid summer’s eve now long past she had but a short time before winter solstice to find the small surviving community, the inheritors of the formula. It was imperative they decipher the codes before the festival of The Unvanquished Sun on 25th December, the day the child she carried within her would be born. Remounting, she traced their trail through the silent glen. The pallor of shock fading as the breath of the rising tempest brushed her cheeks.
As the late afternoon glow petered out into shades of night, the clouds hung low in the sky and bent the tips of the skeletal trees. A poacher’s moon, shrouded in ribbons of straggling cloud rose in the sky only to burst into a blood red orb that imploded upon itself and fell to earth. The path to the glen’s narrow exit was lit in an eerie and unnatural light. Lightening split the sky, followed by the thunder of horses hooves over the muirs. Unbidden, the loyal black steed broke into a trot.

Midgie MacAlpin and the Stone of Destiny

At five o'clock on Christmas morning, it will be exactly 63 years since Kay Matheson sat in a Ford Anglie outside Westminster Abbey.
Kay, a Glasgow Unversity drove the getaway car for the group of four students who liberated 'The Sonte of Destiny i a daring break in that became known as the Caledonian Job
I've always loved tis true story and wanted to write a book for children around it. Now I've done just that and it's out now on Amazon as either in print or as an e-book. 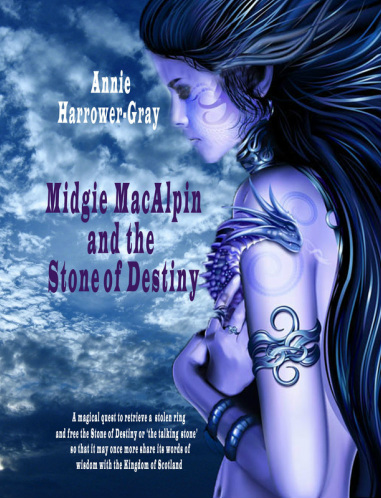